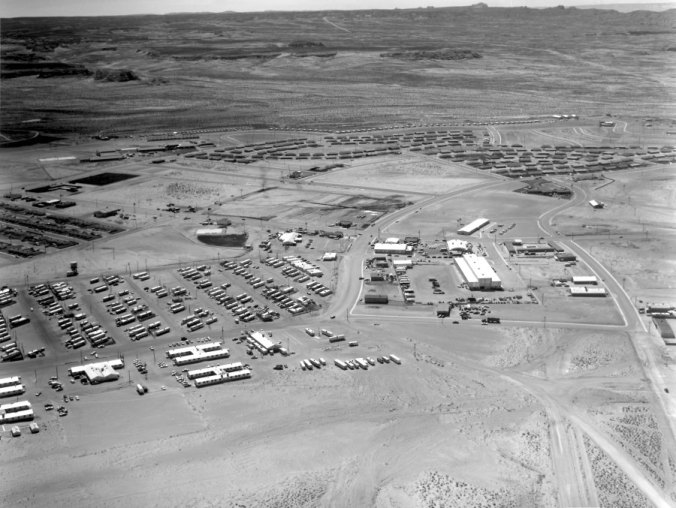 Some of my favorite early pics of Page and the surrounding area are these old black and white aerial shots. You can see a lot of detail and they always bring back memories of what it was like. One of the reasons I’m posting this one is because in my next post or two, I’ll be highlighting some early businesses and I want you to have a reference point for their location if you’re not familiar with it.

We have a lot to talk about in this photo. Click on it to open it up and you’ll be able to zoom in. Let’s start on the right side, as you come into town on 7th Avenue. The Glen Canyon Steak House and Motel aren’t there yet, but it looks like the ground is being cleared for their construction. To the right, along Vista Ave., you get a good look at the Page Hospital and what was at that time, the USBR offices. You can see a close-up of that building and read more about it HERE. You can also see/read more about the hospital HERE. Okay, back to our journey up 7th Avenue. The next building on the left is the Page Boy Motel. The building across the street was the Vostron building and now houses the City of Page offices.

Back to our trek up 7th Avenue. As you go thru the intersection of 7th Avenue and North Navajo Drive, the corner building on the right was a Gulf gas station. Across the street from it, was the Phillips 66 station. I think the Tenney’s owned that. The building to the left of the Phillips 66 on 7th Avenue was Redd’s Bottle Stop and is now the location of Stix Market. The weird shaped white building behind The Bottle Stop housed Babbitt’s Trading Post (Thriftway?) and First National Bank. We’re going to talk about that more in some upcoming posts.

Next to that building was the original Little League field. The concrete slab next to that was once a roller skating rink. It also served as an outdoor movie venue for a time. I blogged on that HERE. I’m not sure what that building was this is sitting where the Empire House would soon be built. You can see the park, Manson Mesa Pool, and the MCS apartments. The new school is under construction and the X and Y buildings look finished. The two rows of trailers across from the X and Y Buildings were a temporary trailer park. You can see the Transit homes dotting South Navajo and the three Butler buildings, which served as Page’s first school, are visible on the Navajo Drive curve.

Okay, let’s come back to the Windy Mesa for a moment. That was the building with no roof. See it? Now, look at the row of small, rectangular white buildings sitting at an angle on the other side of North Navajo Drivre. In addition to the building with Babbitt’s and the bank, these housed some of the first businesses to come to Page. Rexall drug was on the end closest to us and Page Jewelers, Firestone, a locksmith, a men’s clothing store, and a shoe store were all in there. We’re going to talk about those in my next few posts. I believe the “H” shaped buildings along Aero Avenue (it wasn’t called that then)  were MCS barracks and a cafeteria, but I don’t remember much about those, If you do, please jump into the conversation. I believe the large rectangle building to the right of the barracks on Aero Ave was the first location of Page Market.

Bringing the past into the present, welcome to Glen Canyon Dam dot ORG! My name is Mike and I lived in Page Arizona during the early years of the town, the construction of Glen Canyon Dam, and the filling of Lake Powell. I guess that makes me a piece of history.