In this post I want to share with you my remaining pictures of the first Page business district. I am indebted to Petey Lloyd Dietz, Ernie Severino Jr., and Terry Edwards for these pics. As a reminder, these businesses were located close to each other with the small shack businesses in a row along North Navajo Drive, and the building with the bank and Babbitt’s located just behind The Bottle Stop (now Stix Market). You can see exactly where they were in [this post]. Check these out… 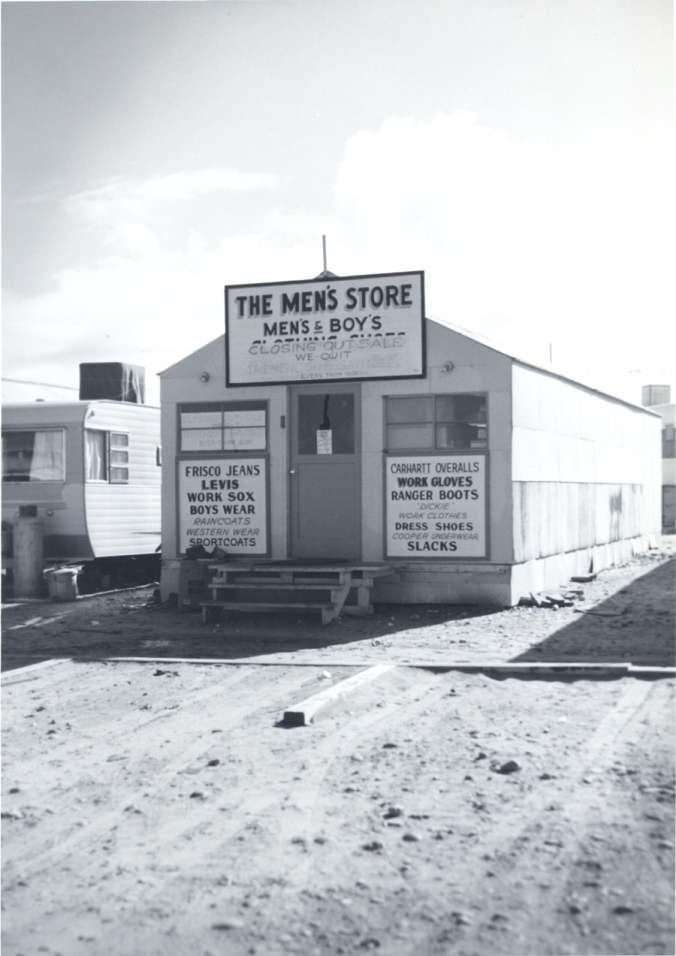 The Men’s Store was going out of business when the above picture was taken. I’m not sure of the date.  The strike of 1959 may have contributed to the decision to close. The picture below shows Grant Jones with a customer. I don’t know who the customer is or if it was taken inside the Men’s Store. 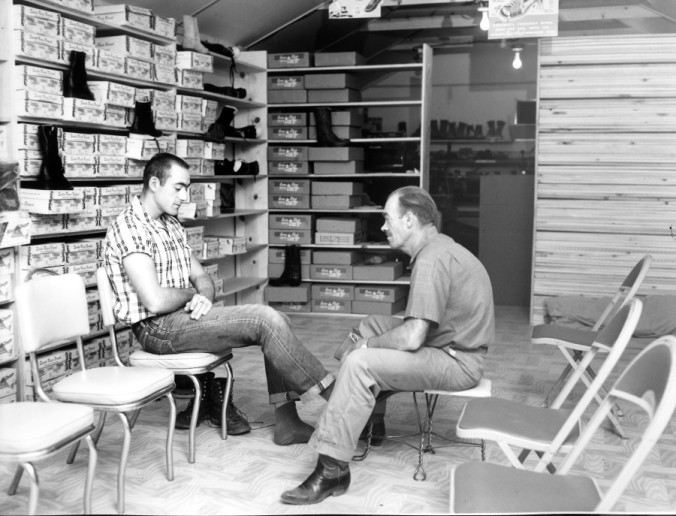 The photos below show the early businesses from different perspectives. 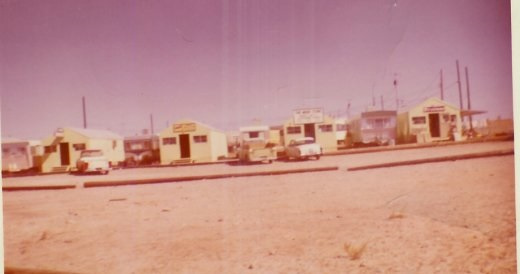 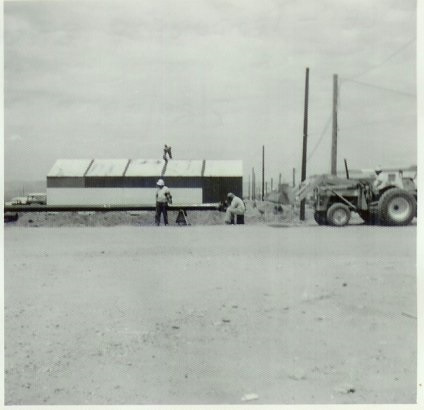 Before we go any further, check out this picture of the bank, located in the same are: 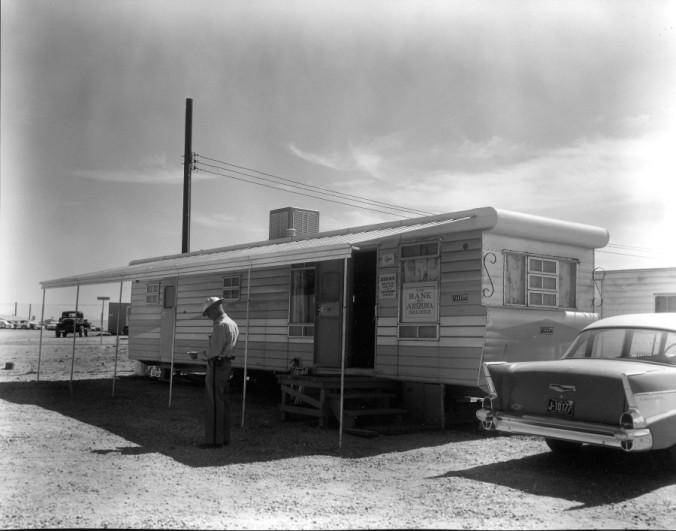 That looks pretty safe! As long as nobody drives off with it. I can’t make out who that is standing there. The street sign says B Street. The sign in the window just says The Bank of Arizona Page Office.

As you face these buildings, looking south from North Navajo, Babbitt’s and newer location of the Bank, were just off to the right, behind The Bottle Stop (Stix Market) as I mentioned above. Here’s a good shot of those buildings. 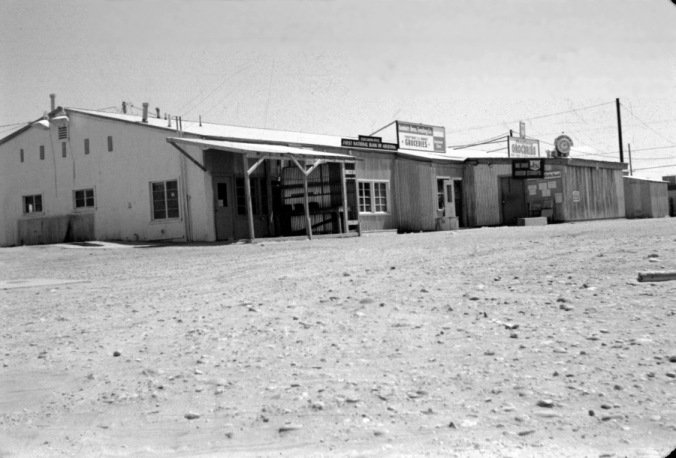 Here’s an earlier shot of that same building before anything was added on. There was a gas station there too at one time. I don’t remember where I got this picture. I’ve had it for quite a while. It’s from the late 50s.

Speaking of late 50s pics, Petey Lloyd Dietz sent me these next two. The caption on the back of this first one below reads, “First graduate of PHS – Donna Taylor (on left) and me (Petey) talking in front of Babbitt’s. Probably 1957.” This is a great shot capturing life in Page at that time! 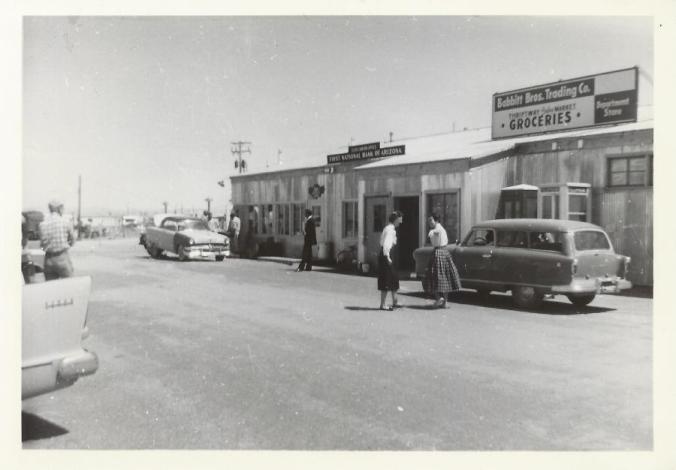 This next one is from Petey as well. It’s a shot of the trailer court at B Street near what would be Aero today. The USBR warehouse is in the background. The businesses we’ve been highlighting are in the background as well, on the other side of that caution sign. The back of the pic reads, “Phone booth where I called.” 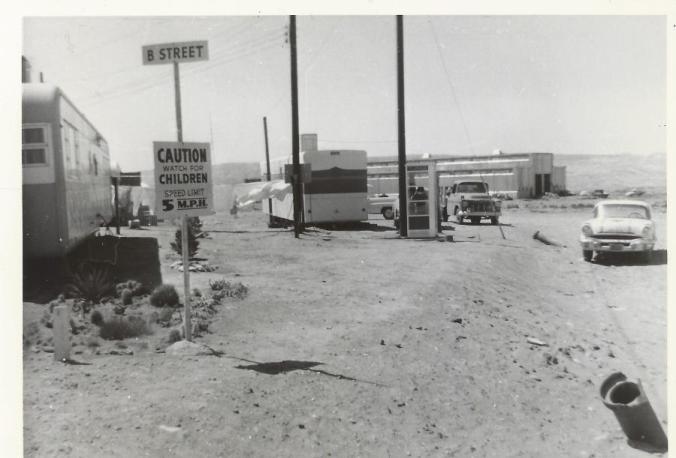 This next one’s loosely related to the early business area, but it gives a feel for life in the trailer court, and a reminder of what it was like if you were there. The back reads, “Taken from our roof – Kelleys Trailer. That’s me (Maxine Lloyd?) in front of their truck. We lived in trailer until MCS housing was finished.” 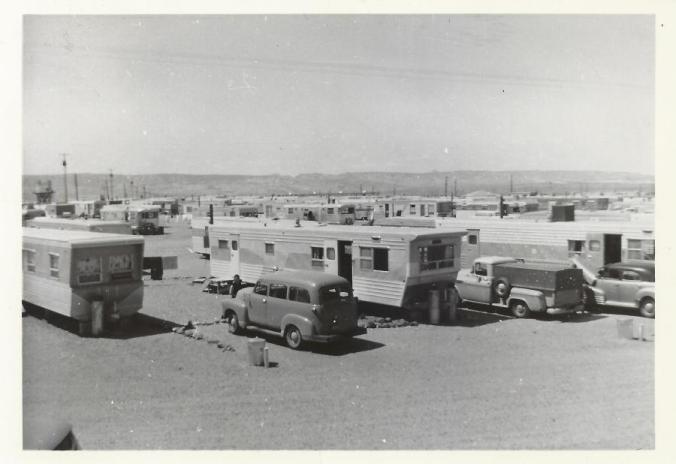 Wait, we’re not done! The caption on the one below says, “Mike and Ernie’s [Severino] Nana at the bank.” Sorry Ernie, I don’t know her name. 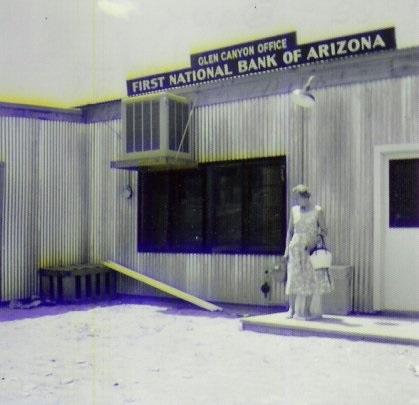