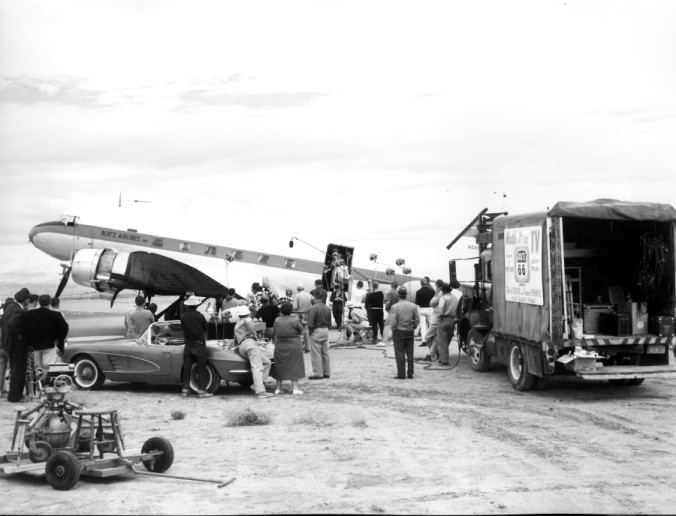 In 2013, I posted a blog about an episode of the old TV series, Route 66, being filmed in Page. You can see that post >HERE<. If Route 66 was before your time, it was a show about two guys – Tod (with one “d”) and Buz (with one “z”) – driving the old Route 66 in a cool Corvette Stingray and doing stuff. You may know Route 66 as Interstate 40. Season One, Episode Nine of Route 66 was filmed in Page and at the Glen Canyon Dam site when it was under construction. This episode aired on November 2, 1960 and was entitled, Layout at Glen Canyon. Construction on the dam was in its early stages and the bridge dedication took place the year before.

In this post, I want to tease out a little more trivia by way of some still images I made of the show while watching it. Some of these are little blurry but clear enough to see what’s going on. Enjoy!

This first image above is one I used on the original post in 2013. They’re filming the scene where the women are getting off the plane. Click this image and enlarge it. Take a look at the all the details and notice the sign on the side of the truck. I’m not sure what the thing on the cart is. Careful leaning on that Corvette, people! We lived at the airport (literally) and this scene wasn’t too far from our trailer’s front door. But I don’t remember them making this show. Here are some stills from the show:

This early scene shows Tod (Martin Milner of Adam-12 fame) and Buz (George Maharis) in a deep discussion just before the models get on the bus to be escorted to where they are staying, which was a couple of trailers somewhere near where the “P” is painted along US89. You can see Manson Mesa in the background of the scenes filmed at those trailers if you watch the show. In the picture above, the line of trailers is P Street, the last street of the MCS trailer court, next to the airport. Our trailer was to the right of this picture right behind (literally!) the hanger. Here’s a wider shot of the same area:

The picture above is a wider shot of the trailers behind the airport along P Street. The dirt driveway that Tod and Buz are headed to was the entrance off of P Street to the airport and the driveway to our trailer to the right of this picture. Here’s another action shot of the same scene:

I’m guessing all the cars are lined up on the street because of the filming. The airport always became a popular place when celebrities arrived.

The picture above is a still from the show where our heroes were escorting the bus full of models out of town to their trailers. It’s a great shot of the Page Boy Motel in its infancy.

The picture above and the three that follow are from a scene where our two heroes are taking the the model’s supervisor (I don’t know what else to call her) to the dam site to overview the location for the shoot. In the above photo, we’re looking back toward Page. Notice the metal building(s) in the background along the road. Do you remember those? I do. They were some kind of covered lay down yard and/or construction warehouse. Whatever they were, I remember them well. At the end of the bridge on the right side of the photo, there are two signs. I remember these as well. One had stats written on it about the bridge and the other had info about Page businesses, etc. The first Visitor’s Center was a modular building that was eventually placed in that clearing just off the highway and near those signs.

In the above picture, our heroes park and get out to look at the dam site. I guess stopping on the bridge is okay if you’re filming a TV show. Notice how low the fence was on the bridge. That was changed in the 1970s to what it is today. Notice too, the electrical switchyard wasn’t there yet, or was in the early stages of construction. The next two pictures are similar so I’ll save my comments to after the second one:

In both of these photos, the right (or left, depending on your point of view) keyway is clearly visible. The keyways were where Glen Canyon Dam would be attached to the canyon walls. There was a keyway on both sides of the canyon/dam. Behind the shadow of the bridge, you can see the train track that spanned that keyway. In the top picture of the two, you can see part of the concrete batch plant at the right end of that short train track. As concrete was mixed in the batch plant, it was loaded into small rail cars that were driven out onto the track. From there, the rail cars would dump the concrete into the buckets carried by the overhead cranes on either side of the canyon wall to the concrete’s final destination at the dam.

Today, the hallway from the Visitor’s Center to the top of the dam, runs through this keyway and part of the sandstone beyond it. That batch plant always fascinated me and I always wanted to go inside it, but never got the chance.

These next two pictures are similar, so I’ll hold my comments to the second one of the two:

If you get a chance to watch this show – it’s on Amazon Prime – one thing you will notice during these scenes at the dam, is the sounds of construction. This grabbed my attention, because I remember what it sounded like, at least from a distance. The last two photos above are from a scene near the base of the dam. The dam/powerhouse construction is behind the camera. That water is from the outlet of the right diversion tunnel. That tunnel was the primary diversion tunnel. The left diversion tunnel was 30+ feet higher (maybe 35 feet – I don’t have that info in front of me) and was intended to handle higher flows. The right diversion tunnel pictured in this pics ran constantly. If you watch the show, the amount of water flowing and the force behind it, was amazing.

Bringing the past into the present, welcome to Glen Canyon Dam dot ORG! My name is Mike and I lived in Page Arizona during the early years of the town, the construction of Glen Canyon Dam, and the filling of Lake Powell. I guess that makes me a piece of history.

Buy Me a Cup of Coffee

Help me keep this site online and ad-free. Buy me a cup of coffee to help defer costs.