Here’s a great shot of the Page Trailer Court dated 12-14-60. Click on it to zoom in and scroll to the far right. Do you see the trailer sitting at an angle behind the airport hanger? That was our trailer. Yea!!! I finally found a picture of it to prove I existed. You’ll also see the drive-in theatre screen and the corrals in the background. The trailer court eventually expanded to include more streets/trailers on the left side of the court, similar to the expansion you see already in place on the right side. At the far left of the photo, you’ll notice a couple of the MCS apartments.

This photo captures a time in Page that I remember well. Click on it to enlarge and zoom in. There are some things worth noting. First, this was taken in 1971 at a time when Bechtel was coming into town to build Navajo Generating Station (NGS). The time between the completion of Glen Canyon Dam in 1964 until movement started on NGS construction in the very late 60s/early 70s, saw the population of Page dwindle considerably. I remember many, if not most, of the USBR houses and MCS apartments sat empty for a number of years from 1964ish to 1970ish.

The photo above shows the abandoned MCS trailer park as it was being re-populated with the coming of Bechtel and its associated trades. Our trailer site is long gone in this picture but the tree that was near our front yard is still there at the top right corner of the picture, behind the airport hanger. This is a good aerial shot of the Empire House, Page Club Restaurant, Sportsman Headquarters, Pink Sans, and a few of the early gas stations. Is that the Teen Canteen still standing near the curve of the old dirt road between the MCS Apartments and the trailer court? I’m not 100% sure, but it could be.

The original business district foundation slab is still visible on the left edge of the photo, near where present-day STIX Market is. That was where the original Babbitt’s, the bank, barber shop, et al, were located. You might remember Redd’s Bottle Stop being to the left of that slab along what was then, 7th Avenue. The concrete slab that was an outdoor movie screen and dance floor is still there in this picture, located behind Keisling’s gas station. If I remember correctly, the white rectangle building set back from 7th Avenue near the left edge of the photo and near the old Babbitt’s slab, was the Dairy Queen. The building in front of it, that’s only partially visible, was DeWitt’s Kentucky Fried Chicken. I was a cook there for a time during High School. Mr. Dewitt was not only one of my teachers, but my boss. Talk about pressure! 🙂

This first picture is undated, but it’s from the 60s. When I moved all of my pictures to a new computer, the meta data didn’t come with them, so I’ve lost all the dates and photographer info that was written on the back of them. But check this out:

You might want to click on that picture and open it while we talk about it. This is a look down present-day Aero Ave, looking toward the airport. The long building in the center was (is?) the USBR warehouse. To the right of it is the bowling alley and below the bowling alley is the Page Boy Motel. The street at the bottom is Vista Ave. Looking down Aero Ave toward the airport, I believe the first long building on the left was Page Market. I seem to remember the H-shaped buildings being barracks and a mess hall built early-on for construction workers on the dam.

The small buildings lined up at the near end of the trailer court were early Page businesses. Rexall Drug, Page Jewelers, and a Men’s Store were among those buildings. Was there a shoe store there too, or was that part of the Men’s Store? It’s all a blur sometimes. The building below the Little League field on the right of the picture was the original location of Babbitt’s and First National Bank of AZ, and the barber shop. I don’t remember if there was anything else in there. It looks abandoned in this picture, so the permanent buildings may have been in place by the time this photo was taken.

To the right of the baseball field, you can see a little bit of the concrete slab that was used to show outdoor movies and for dances. Above it, you can see a corner of the MCS apartments. Do you see that building by itself on the curved road from the MCS apartments to the trailer court? Did that serve a dual purpose? Was it both the Teen Canteen and the American Legion hall? For some reason that sticks in my mind. If you look at the very top of the picture and zoom in, you’ll see the airport hanger on the left. The dark area just below the hanger was our trailer. The small trailer to the right of the hanger was the Bonanza Airlines terminal. There was also an elevated platform near that trailer that served as the “tower” for Bonanza Airlines. Whenever the airline was on its way in or taking off, the airline guy (I don’t remember his name, but he lived on First Ave) would go up on that platform and talk to the pilot via radio. As a young kid, I always thought that was pretty cool. Zoom into this picture and look at the detail. You’ll see people walking, cars on the move, and one car with its hood up.

Here’s a shot I took this morning from Google Earth, showing that same area. I tried to get as close as possible to the same angle. This screen shot was taken today, 3/31/18 but the Google info on the photo is dated 4/6/2015. Enjoy!

Thanks for visiting my site! 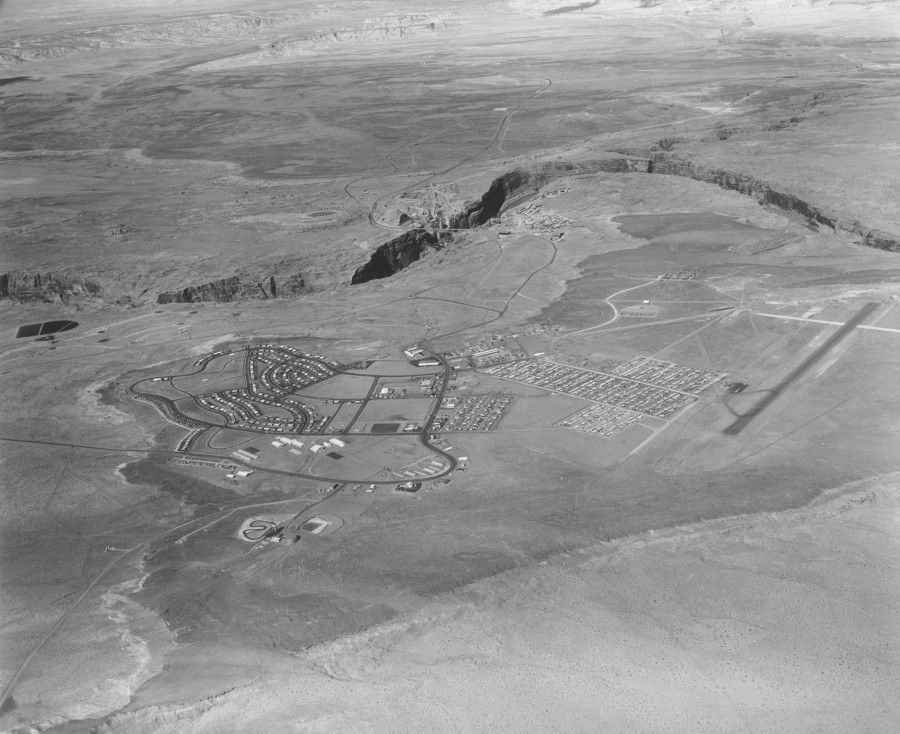 Here’s a 1960-ish shot of Page and the surrounding area from the seat of a plane. If you click on it, it will open it up in a new tab and enable you to zoom in closer. All of my pictures work that way. You’re welcome. 🙂  Enlarge it and let’s talk about some of the detail.

Starting on the bottom left, you’ll see the original radio station (KPGE) just off the old Coppermine road. I don’t remember what the building between it and the water treatment plant was. If you do, please leave a comment and let me know. I posted pictures of the water treatment plant already in a post I called Got Water? You can check it out >HERE<. Next to the water treatment plant is the go-cart track and the Little League baseball field. If you look at that area on Google Earth, you can still see remnants of the go-cart track. That’s actually the second location of the baseball field. The first one was behind Keisling’s gas station and The Bottle Stop (now Stix Market). The outline of it is still visible in this picture. You can see that original field better >HERE<.

Moving up from the water treatment plant, you’ll notice that Chapman’s trailer park isn’t there yet. Several church buildings are dotting the landscape along church row (7th Avenue – now Lake Powell BLVD). The long buildings on the inside loop of church row were the teacher’s apartments. They may have been under END_OF_DOCUMENT_TOKEN_TO_BE_REPLACED

Some of my favorite early pics of Page and the surrounding area are these old black and white aerial shots. You can see a lot of detail and they always bring back memories of what it was like. One of the reasons I’m posting this one is because in my next post or two, I’ll be highlighting some early businesses and I want you to have a reference point for their location if you’re not familiar with it.

We have a lot to talk about in this photo. Click on it to open it up and you’ll be able to zoom in. Let’s start on the right side, as you come into town on 7th Avenue. The Glen Canyon Steak House and Motel aren’t there yet, but it looks like the ground is being cleared for their construction. To the right, along Vista Ave., you get a good look at the Page Hospital and what was at that time, the USBR offices. You can see a close-up of that building and read more about it HERE. You can also see/read more about the hospital HERE. Okay, back to our journey up 7th Avenue. The next building on the left is the Page Boy Motel. The building across the street was the Vostron building and now houses the City of Page offices.

Do you remember this? I think it predates the drive-in theater that soon popped up north of town by the corrals. Those aren’t there anymore either. This makeshift theater was located behind Keisling’s gas station at the approximate location of the current radio station. The MCS apartments are in the background and there was a Little League field to the left of this picture. Did this site become an ice skating rink for a short time, or am I having a senior moment?

This first picture looks like something out of a Normal Rockwell painting. My first thought was that it was the original Exxon (Enco) gas station on the corner of 7th Avenue and Elm, but the wall under construction on the right side of the photo would have to be the Empire House, and that’s not the Empire House. Plus, other pictures of the old Exxon station show a completely different layout with two garage bays on the left side of the building. That’s how I remember it.

After digging a little further, I realized this is the old Richfield station that was on the corner of South Navajo and 7th Avenue (Lake Powell BLVD). You can see 7th Avenue starting to curve toward church row. The building under construction on the right is the First Baptist Church. The last time I was in Page, this gas station had been turned into a fast food restaurant. The quality of this photo is amazing. So are the two pickup trucks! The MCS apartments are visible on the left behind the small trailers. It looks like they’re under construction. The white building further back is probably the American Legion building and beyond that, the original trailer court. This is a good shot of Tower Butte and Navajo Mountain in the background. I’m not sure what that billboard says in the background. Even zoomed in, I can’t read it.

The bottom picture is of the same building some time later. I wonder if the Cadillac was pink. Neither picture is dated and I don’t know who the photographer was.